Letting Go of What Other People Think of You 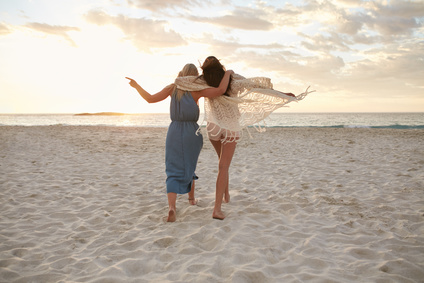 Do you experience crippling fear at the thought of what people might think if you went on holiday without your children? If you showed up at a parent/teacher meeting with your new lover? If you had a double dessert at a restaurant? If your socks weren’t the same colour? If you said that you thought you were really beautiful? Ranging from the serious to the ridiculous, some people break into a cold sweat when they think of WHAT PEOPLE MIGHT THINK!

There could be several good reasons why you might not want to bring your new lover to a parent/teacher meeting or why you wouldn’t want to order two helpings of desserts, but none of these reasons could reasonably be what other people might think! What other people might think is just not that interesting and it’s often totally unpredictable, because most of the time, people are not really observing you and what if they were? You can’t tell what conclusions they’ll come to concerning you. What’s really important here is what you yourself think. So whose judgement is it that you’re really fearing?

Let’s take my first example: if you took your lover to see your children’s teacher, how would you feel about that? If you’re worried about what other people might think, it might be that you’re not all that persuaded that it’s a good idea yourself. Were you convinced of its appropriateness, you wouldn’t give it a second thought – it would seem natural to you, so when you think you’re really concerned about what your sister-in-law, your neighbour, your boss would think, it could very well be just that part of you that they represent you’re worrying about. When you exchange and communicate with other people, they hold up a mirror to you where you can see yourself. Sometimes, you don’t really like what you see, but that has got nothing to do with them. It’s got to do with you, so please don’t pass on the blame. Give yourself permission if you can live with the consequences.

If we take this apart and have a look at it, what do we find? Judgement. Judgement never was fun and so is something that you should avoid at all costs. I’m not saying that you can’t have an opinion. Judgement implies that there could very well be a punishment at the end of it, albeit a moral one. Judging yourself or others means a possible rejection of the person judged, and who wants to be rejected? This is how we come to fear judgement, because we really don’t want to be rejected. We want to be loved and accepted, so exposing yourself to other people’s judgement means risking rejection. In deciding whether you want to risk being judged, just remember that it might not be YOU that they’re judging but your actions.

One way of avoiding being hurt by other people’s judgement is to choose to do what’s right. Not necessarily what’s easy, but what’s right. If you’re always standing in your integrity, well, then there’s nothing anybody can judge you negatively for, is there? If, however, you’re prone to compromise your own judgement of what’s right to do in a situation, then it stands to reason that people will pick up on it and blame you. If they blame or criticise you when you’ve only done what you felt to be right, then that blame cannot really hurt you, can it? Because you acted according to what seemed right to you. Being adult means that you are the best judge of what’s right. If you sometimes judge wrongly and end up doing the wrong thing, then that’s a mistake and everybody has the right to make a mistake.

If you not only want to avoid being hurt by other people’s judgements but want to get rid of the paralyzing thought of it, the most effective way to stop that little voice in your head is to stop judging yourself. Of course, you can stop judging your self, but what is equally powerful is to stop judging other people. Once you let go of the obligation to signal disapproval, you’ll find yourself smiling all the way to the bank! Nothing more liberating: “Wow, the world can go on and I don’t have to judge it!” What a load off your shoulders. We only tend to judge in others what we find missing in ourselves, what we find upsetting and what we want to change. Think of this: if you’re walking down the street and see a woman with a very large bum in a pair of very tight jeans, you’ll only be going: “Does she know what she looks like?” if you can imagine yourself in the same situation. If you have no issue with your bum in a pair of tight jeans, you won’t even notice. And you won’t have to disapprove because she’s doing something you’re afraid to do yourself. Without judgement, you can actually start wearing those same jeans that the woman is wearing and enjoy it! There can be no right and wrong in this. It takes nothing away from anybody and it doesn’t hurt anybody (except the susceptibility of all those people (or should I say women?) who’re held back from doing what they want by fear of what people might say 😉).

When we leap into judgement, our brain is happy because it finds it really tiring to have to understand. It’s really much more convenient and energy-saving just to catalogue: you did this (wear a tight pair of jeans) so you must be that (a great big slut). See? It’s not difficult. If you’ve got several boxes, you can quickly sort out people and their actions into different boxes. It’s time- and energy-saving. To illustrate this, let me give you an image: imagine every time you wanted to make yourself dinner, you had to invent the cooker, the frying pan, the plates and the cutlery? Rather a daunting task, wouldn’t you agree? Who’d bother? This is how our brain feels about understanding: it involves a lot of thinking, questioning, querying, probing and weighing of the pros and cons. Who’d want to bother? Much faster just to sort everything into boxes. There’d be nothing to invent or investigate. You’d come up with a clean, painless judgement on the spot.

But where’s the joy in that? I’m not saying that I’d enjoy having to invent the cooker, the frying pan, the plates and the cutlery before sitting down to a meal, but when it comes to people, I really don’t want to apply the same efficient sorting machine that our brains can be. I want to experience the totally of things, not worrying about productivity. So I can safely apply one method to one thing (relying on previous experience, other people’s hard work and well-tried methods for cooking), and another to another, (connecting with people and experiencing them afresh, with no preconceived ideas and judgement).

Most of the time, I don’t feel the need to have an opinion about what people do. I just let them get on with it if it’s not interfering negatively with anything I or somebody else is doing. If they’re doing something that does interfere with how I think the world should be, I make things easy for myself and my brain: we don’t have to invent anything from scratch but rather use some existing tools, the first of which is always to assume that people are doing their best. Why wouldn’t they? So I’m always putting the most generous interpretation on everything I notice. If somebody cuts me off in traffic, I just assume that he’s in a desperate hurry to save somebody’s life! Or so late that he risks some very grave consequences if he doesn’t make it in time. That’s rarely my case, so I can just let him get on with it. He’s not doing it to me, is he? He’s doing it because he FEELS he has to do it. I might not know his reasons, so who am I to judge? I presume that he is the best judge of his affaires.

You could now be saying: “But you’re such a wimp, Katrine! Stand up for yourself! Chances are that he’s not saving anybody’s skin nor his own. He’s just being super aggressive, taking himself to be more important than anybody else.” You might be right, but if I’m to put a generous interpretation on that, I must ask myself why that is. Could it be that he’s suffered a lot of strife in his life? If he thinks he’s the most important person on earth, how come he came to suffer from this delusion? So whatever way you turn it, there is always a good reason to excuse people their inconsiderate behaviour. They might have been inconsiderate to you, but why take that personally? Had it been anybody else in the car, he’d most probably done exactly the same!

My point is that when you give up on judging others, you also stop judging yourself. When you stop judging yourself, it doesn’t spring to mind that other people could be judging YOU! This gives you an enormous sense of freedom, because all you have to do is to listen to yourself. There’s nobody else involved. If your mother-in-law comes with snide remarks, well then that’s HER judgement. If she’s judging you, it’s because she’s judging herself. Now who comes out the happier of you two?

How would you feel if you had greater self-confidence? If you were no longer worried about other people’s judgement or your own? In my Online 12-Module Video Course on self-love, we talk back to the Inner Critic! Check it out here.