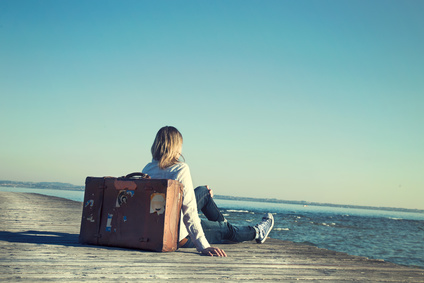 We choose so many things in life. In fact, we get up in the morning and the choosing begins: what shampoo to use, what to have for breakfast, what clothes to wear, what to say to your family, how to get to work… the list is endless and for some of us, these are no longer choices because all this has become routine. Maybe you’re not consciously choosing any of these things, you’re just going through them mindlessly, sparing your mind further thought on it, leaving it free to think up something more exciting, or that’s what you think.

Even if 95% of our thoughts are identical to the ones we were having yesterday and the day before, we still think that they’re new. We’re not being present with them, so they become routine. It feels safe, because we know our routine and we know our thoughts; nothing frightening there. Why, you’ve seen it all before! You know exactly how to react to it. So your reaction becomes routine too. And when you think of it, have you really chosen your reaction to most events and experiences?

If you have, you’re among the select few. Most people are guided by their emotions that sometimes play havoc with their lives. These people feel that they have to engage with whatever emotion presents itself to them! They’re being polite, to the detriment of their own happiness.

There’s no controlling emotion. What you CAN control is your reaction to it.

Here’s an analogy I hope will make this clearer:

Imagine yourself at a party. You’re not particularly enjoying it because everybody’s having a great time except you. You’re watching people dancing when a good-looking person comes up and asks you to dance with him. You recognize him from before because you’ve known him for quite some time. His name’s Anger. My question is: “Why would you want to get up and dance with him?”

This is what I call choosing your reaction. You’ve clearly identified Anger, he’s right in front of you and you know him, remember? Maybe you’ve already danced with him and maybe you didn’t particularly like it, so why get up and dance with him again? Now that would be self-sabotage, wouldn’t it?

Another person, say Sadness, comes up and asks you to dance. Would you? I don’t think so. You can see who it is, so no need to get excited or to tell yourself that you’d better accept him or there might not be any other offers. Please let yourself just say: “No, thank you. I’m not dancing tonight.” There’s no need to get defensive or aggressive about it. A simple “NO” suffices.

And when Frustration comes tempting you, you can just say: “No, thank you for your kind offer but I’ll just go and dance with Happiness and Joy over there!”

What I’m trying to illustrate is that feelings and emotions a bound to come looking for you because, as a human being, you are a feeling machine! You turn out feelings the way a baker makes bread and a brewery brews beer. There’s no preventing the emotions from arising but you don’t have to take them on. You don’t have to identify with them and you don’t have to feed them. If you follow my analogy from earlier, you can just let them find another dance partner.

You ARE not your feelings because you’re feeling them. Like the baker is not a loaf of bread, he just makes it. In the same way, you can wear a pair of jeans, but this doesn’t make of you a pair of jeans – you’re just wearing them.

So the first step to emotional wellbeing is to avoid cultivating the feelings and emotions you don’t want to be feeling. Some people take this to mean that they have to suppress undesirable feelings, but you can’t. You might manage to ignore them for a while, but they’ll find a way of blowing up in your face when you least want it (that is assuming that you sometimes want feelings to blow up in your face). Suppressed feelings are like timebombs. They’re ticking away, and it only takes a spark to ignite them.

This is what happens when you get inordinately angry or sad over a totally insignificant event like your daughter “forgetting” to take out the rubbish. You blow up, or rather your suppressed emotion blows up. You scold you daughter for not taking out the rubbish and it turns into an argument that’s not really about taking the rubbish out. It’s about something entirely different and your daughter’s negligence was just the spark that lit the fuse leading to your pent-up emotion.

Most of us (except those who live on a mountain top on wild berries and spring water, meditating 24/7) have got a response to unpleasant emotional experiences that we default to. It can be anger, blame or avoidance. After all, it’s easier to say: “I don’t care” than “I’m hurt.” This is obviously denying emotions. We have got a favoured go-to self-defence mechanism that is in place and ready to use when we recognize an experience as an emotional one. A go-to reaction can be blame, lashing out, finding fault, making excuses or inflicting payback. Mine’s blame. What’s yours?

Because, getting back to my example of the neglectful daughter, it not about the rubbish, it’s about the feelings that this incidence brought up for you.

So what is that about? Well, it’s up to you to find out. You do this by pressing the pause button. So instead of going straight for your favoured default self-defence mechanism, you press pause, suspend judgement and ask yourself what you’re feeling. It might need some getting used to to find out exactly what you’re feeling, but admitting that you’re feeling something is already a start. If you’re saying: “I don’t care; it’s not important” or “it’s somebody’s fault” to explain away the hurt you’re feeling, you’re not recognizing your feelings and you leave them to fester to some other time. What you could be doing instead is to ask yourself who or what made you feel the same? Was it a boss who expected you to do everything for him or her? Was it your spouse who had started to take you for granted? Sometimes these original hurts can lie very far back in the past. If you can’t find the original hurt, don’t worry; you’re now aware of the emotion so it’s lost some of its hold over you.

I’m NOT suggesting that you shouldn’t take issue with your daughter, your boss or your spouse if you feel that they’ve wronged you; I’m just saying let’s keep it in proportion and have a conversation about it. Your default self-defence might not be a sensible, problem-solving conversation. You might need to leave it till later so that you can blow off steam and sort out your emotions. When you come back to the event that triggered your emotion, don’t start telling yourself stories about it. Don’t start telling yourself that your daughter didn’t take out the rubbish because she doesn’t respect you. This is YOUR INTERPRETATION of her action. She could just be lazy 😉

I hope you can also see how this can protect you from angry people. If somebody is furious with you and you honestly think that the person is overreacting, well, chances are that it’s got nothing to do with you and everything to do with them and their suppressed emotions. This is an excellent way of not taking things personally. Just remember that you might just be the spark, not the bomb itself, so no need to be aggressive back because it’s probably got nothing to do with you. This is saying “NO” to dancing with anger: you recognize it for what it is, but you don’t fuel it. It’s not your choice of a dance partner 😉

If you want to get grounded in your BEING where you can accept ALL of your emotions and feelings, check out the Self-Love Activation Course, an Online 12-Module Video Course that’ll connect you to your truth and make you all the stronger for it. Click here.